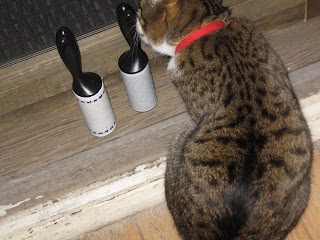 Each morning, I do a little dance. While I wish it were a dance of joy, celebrating another day of being alive, the dance more closely resembles a high school production of West Side Story or the fight scene from Beat It. For someone looking in from the outside, it would appear that I'm doing some weird choreographed dance-fight with an invisible opponent. And what's that weapon in my hand? Is that? Could it be? Yes, it's a lint roller.

My adversary is a large, limber, affectionate, and very hairy cat. To protect the guilty, we'll call him "Ziggy". Before I leave every morning, especially when I'm wearing black or navy pants, "Ziggy" circles my ankles, making sure they're evenly and thoroughly coated with his cast-offs before I leave the house. Thus the wielding of the lint roller at home, despite keeping back-ups in my car and office.

Some folks who are craftier than I have developed uses for this seemingly inexhaustible natural domestic resource. For example, we have a book called Knitting with Dog Hair. It covers the cleaning, carding, and spinning of animal hair to make wearable clothing. There are also many sites that can help you with this, either for making bags from cat fur (with video!) or clothing with dog fur. There's even an article about how to craft with or otherwise recycle dog, cat and human hair. If you're just not that crafty, there are artisans who will spin the fur into yarn for you, or assemble the fur into scarves or dreamcatchers.

While "Ziggy" is a handsome cat with a lovely ocelot-type coat, I think his fur looks better on him than it does on me or my clothes. So what I would really like to know is if there's a mad scientist in the house who's invented hair-proof clothing, counter-tops, or moisturizer. Meanwhile, I'll keep fight-dancing with "Ziggy" in the mornings, only to lose each and every time.

Ahhh, animal hair. A woman in Colorado has started a sweater line made from her English Sheep Dog hair--the sweaters are amazing, but I just can't bring myself to spend a lot on dog hair clothing.

It is my understanding that a dog hair garment will always smell bad when wet, no matter what you do to it.