Since I became the library's blogger about a year ago, this forum has had little-to-no mention of sports. You see, I was somewhat . . . uncoordinated as a youngster, and that has morphed into apathy and ignorance of the sporting world in adulthood. I never know who's in the Super Bowl, World Series, or Final Four. My occasional contribution to sports conversations is my awesome recipe for guacamole.

So imagine my surprise when I attended a roller derby tournament at the College of Santa Fe last year. I wasn't "interested". I wasn't "engrossed". I was fanatical, with favorite players, a nuanced understanding of the rules and strategy, and a very hoarse voice. I was elated, not just from the visceral joy of my team winning, but from the knowledge that I had finally(!) found my sport. 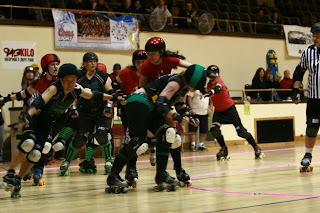 Roller derby is appealing because the rules are very easy to understand; most leagues are all-female; women of all abilities and physical types can participate; it's simultaneously full of brutality and camaraderie; and the uniforms are unlike those in any other sport: funky, punk, DIY and completely wild.

With team names like the Disco Brawlers and Muñecas Muertas, and players named "R 2 Beat U" or "Punchkin Pie", the bouts are fun for the spectators and a tad dangerous for the players. As a result, The Duke City Derby, the Albuquerque league that umbrellas Santa Fe's team, had been having issues finding an appropriate venue. Fortunately, they've found a season home at the Santa Ana Star Center in Rio Rancho, and are jamming regularly until September 19th.

If you come to one of the bouts, come by and say hi. I'll be the one screaming my lungs out when Kamikaze Kim makes another treacherous pass look effortless.

One of my girlfriends, a sweet stay-at-home mother of five, recently took up women's hockey and became a hardcore competitor. Let us know when you join the team - we'll be there to cheer you on!

I'm as bad on roller skates as I am with a softball bat or soccer ball. I'm just glad to be a spectator!