This article was published by the Albuquerque Journal online on March 4, 2019: https://www.abqjournal.com/1288144/sf-library-director-hodapp-has-retired.html 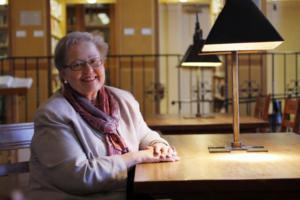 The longtime director of Santa Fe’s public libraries has closed a chapter on her life and started another one as a retiree.Patricia Hodapp, who joined the library staff in Santa Fe in 2004, officially retired Jan. 31, according to a news release.

Prior to coming to Santa Fe Hodapp served for 12 years as director of marketing for the Denver Public Library, where she helped shepherd the library through a system expansion, as well as building a new main library downtown.

Similarly, she worked closely with the library board and supporters to develop Santa Fe’s south side library. She was also instrumental in developing the “Books and Babies” program, now in its 13th year. Last year, Hodapp oversaw the extension of hours at the La Farge branch and worked with Friends of the Library on a study of library services, buildings and needs to help guide future planning.

Hodapp was winner of a New Mexico Book Co-op’s literary award in 2015 for her ongoing support of local authors and books. She is an author herself, having penned “The Complete Santa Fe Bucket List: 100 Things to do in Santa Fe Before You Die” in 2016.