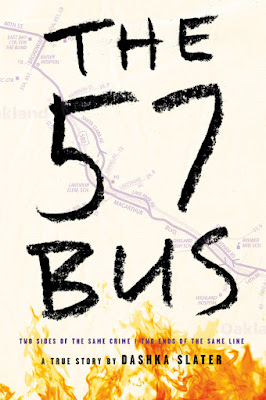 A True Story of Two Teenagers

and the Crime That Changed Their Lives

By Dashka Slater
Two High School students, from two drastically different realities, share the same bus on their way to and from school. One, a white teen, attends a private school in Berkeley, while the other, a black male, goes to Oakland High. Sasha is Agender, appears male but doesn’t identify as a male or female. Sasha is very smart with supportive parents and peers, has a bold sense of style, often in Steampunk fashion and skirts.

Richard lives in East Oakland where the community struggles with high crime and poverty. He has lost many friends and family to gun violence. His mother works extremely long hours to support her family. School is difficult for Richard, it is easy for him to fall through the cracks at O High, but he works closely with a school counselor to try to pass his classes and get to graduate. People know him as a fun-loving prankster with a big heart, who has been dealt a good deal of difficulties in his young life.

One day as the two teens’ lives passed by each other on the 57 Bus, Sasha was asleep near where Richard and his friends were sat. The friends noticed that Sasha was wearing a skirt and found it to be weird and disagreeable. Richard is dared to flick his lighter at the skirt and quickly, what was suppose to be a small, laughable flame, became a person’s legs completely engulfed in fire.  After the senseless crime, Richard now faces the court for hate crimes and possible life in prison.  Sasha returns home after months of surgeries and recovery. The community hangs rainbow flags throughout the streets, the school body all wears skirts in support of Sasha.
The 57 Bus is an important read for teens and educators. It creates great opportunity for conversation and deep thought about divided communities, both racial and financial, gender identity, and the justice system. One single thoughtless crime can alter lives forever. Richard’s careless “prank” destroys his chances of graduating High School and having a brighter future than family before him. Sasha’s attack thrusts the teen into the spotlight which builds a stronger, more supportive and aware community, that work toward creating a safer, more inclusive world for all genders. Both of these teens’ story deserve attention.

Check Out The 57 Bus from SFPL!