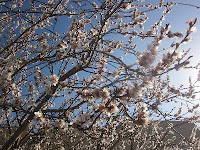 It’s officially that time of year. The wind is picking up, sprouts are appearing, spirits are lifting. Rebirth is in the air! Time to take those winter coats in for cleaning and go out for a nice long walk. It’s beautiful out there in the Land of Enchantment! 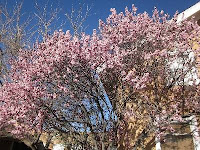 On Saturday, City Councilors, architect Ike Benton and community leaders who helped fund and have supported the Library will be present to celebrate. The day will feature a marimba band, storytelling and refreshments.

“The Southside Library has been a work of love, “ said City Librarian Patricia Hodapp. “From the day we opened five years ago with 1,700 patrons thronging in and 1,750 items checked out, we knew we had a winner for the whole Santa Fe community, but especially the Tierra Contenta area.” The use of the library, measured by people who pass through our doors and the number of items checked out continues to grow. Since the library opened its doors over 872,000 people have visited and 548,000 books and other items have been checked out.”

Hodapp noted, “ These are impressive numbers, but to the library staff they are not merely numbers. They are representative of the patrons they know and serve every day. We welcome the community to celebrate with us.” Special guests will be Rebekah, Emmaleigh, Samantha and Gabrielle Rivera, daughters of City Councilman Chris Rivera and Angela Rivera. The four Rivera girls were the first patrons to check out books when the Southside Library opened in 2007.

The Fifth Anniversary celebration is sponsored by the Friends of the Library.
No comments:

Your children can explore science through experiments at the Santa Fe Public Libraries March through May after school. Each of the three branch libraries will host six science programs this spring. The programs are free, but registration is requested.
Come and have fun exploring science through experiments about air, water, chemistry and building structures.
The program is open to children 7-12 years of age.

Participants must call to register at their selected branch. All programs will be held from 3:30-4:15 p.m.

These free programs are funded by a grant from the Los Alamos National Laboratory Foundation.
1 comment: