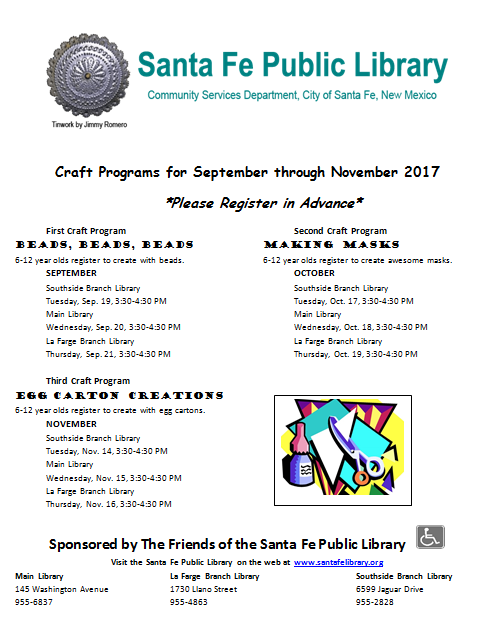 Jess Checks Y.A.: GRRRLS on the Side

GRRRLS on the Side


16 year old Tabatha, our main character, is heavy set and bullied by her peers and those who once were her friends. She does have a friend, Mike, who she attends a punk show with, there she picks up a zine that invites her to go to a Riot GRRRL meet up. At the meet up she is introduced to bold, strong, older females who challenge her to understand her white privilege as well as her own sexuality. Tabatha has found her tribe and as the group bonds, they find themselves learning, growing, and loving, through many circumstances.

GRRRLS on the Side is a historical glimpse into a feminist movement, full of 90’s pop culture nostalgia. The 90’s weren’t as politically correct as we are nowadays, still today we have a lot of growing to do and steps to becoming more understanding and tolerant of other races and other’s sexuality. Don’t be surprised by some of the characters’ ignorance, as punk and revolutionary as the book presents itself. Some of the passages can serve as great way to have a conversation about why a character’s actions are problematic and how they can be made right.

There are awesome, truly enjoyable, parts in the book design, as each chapter ends with a page from our main character’s Riot GRRRL zine, complete with poems, articles, band names, and tour dates. The text with images and collage create a palpable feel for the punk scene and 90’s time period. The printed zines can surely be relate-able to today’s teens on social media and online blogs as well as the need for young adults to find their own tribe, their own community that helps them grow and understand the world in which they live.


Check Out GRRRLS on the Side


The Punk Singer : a documentary film about Kathleen Hanna
Music by Bikini Kill
Reject all American
The C.D. version of the first two records

Opening Reception “Portable Magic: The Art of the Book” at the Capital Rotunda Gallery, September 8

A Gala Opening Reception will be held on Friday, September 8 from 4pm-6pm in the Capitol Rotunda Gallery at the northwest corner of Paseo de Peralta and Old Santa Fe Trail.

The opening reception and gallery are free and open to the public. 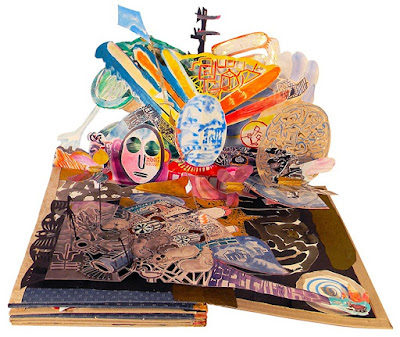 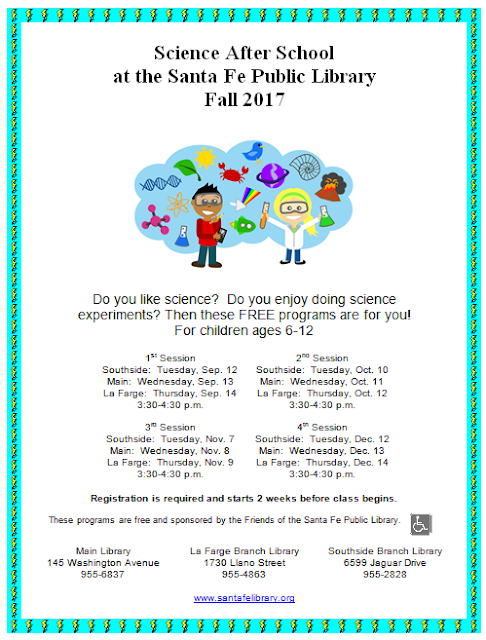 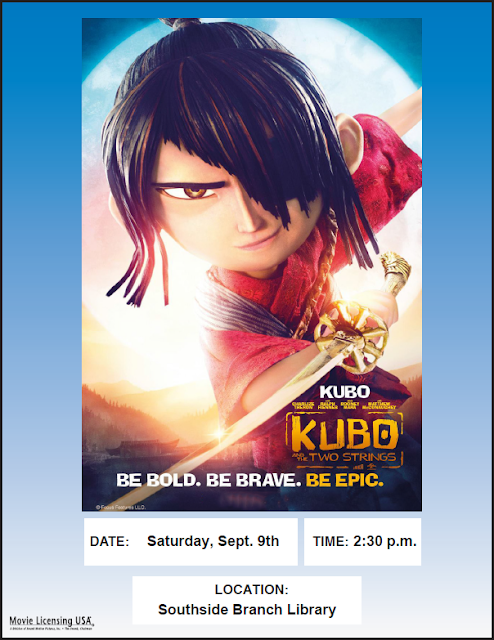 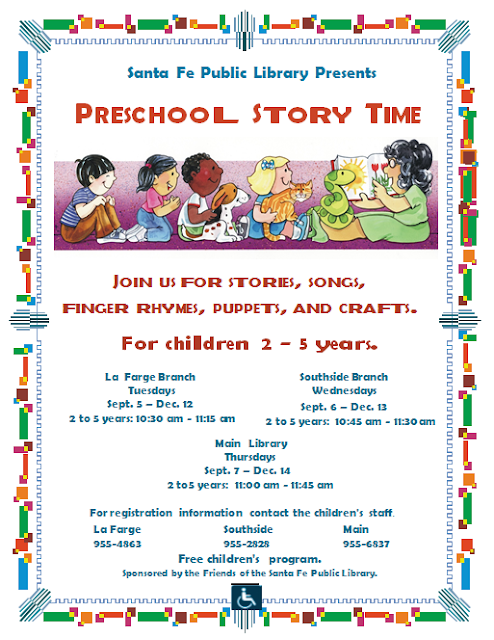 How to View the Solar Eclipse Safely

Sorry, we don't have any eclipse glasses at the Santa Fe Public Library but there are still safe ways of observing the partial eclipse without them. Please read these safety warnings and projection projects from NASA below:

Looking directly at the sun is unsafe except during the brief total phase of a solar eclipse (“totality”), when the moon entirely blocks the sun’s bright face, which will happen only within the narrow path of totality.

The only safe way to look directly at the uneclipsed or partially eclipsed sun is through special-purpose solar filters, such as “eclipse glasses” or hand-held solar viewers. Homemade filters or ordinary sunglasses, even very dark ones, are not safe for looking at the sun; they transmit thousands of times too much sunlight. Refer to the American Astronomical Society (AAS) Reputable Vendors of Solar Filters & Viewers page for a list of manufacturers and authorized dealers of eclipse glasses and handheld solar viewers verified to be compliant with the ISO 12312-2 international safety standard for such products.

An alternative method for safe viewing of the partially eclipsed sun is pinhole projection. For example, cross the outstretched, slightly open fingers of one hand over the outstretched, slightly open fingers of the other, creating a waffle pattern. With your back to the sun, look at your hands’ shadow on the ground. The little spaces between your fingers will project a grid of small images on the ground, showing the sun as a crescent during the partial phases of the eclipse. Or just look at the shadow of a leafy tree during the partial eclipse; you’ll see the ground dappled with crescent Suns projected by the tiny spaces between the leaves.

A solar eclipse is one of nature’s grandest spectacles. By following these simple rules, you can safely enjoy the view.  For additional information, visit: https://eclipse2017.nasa.gov/safety. 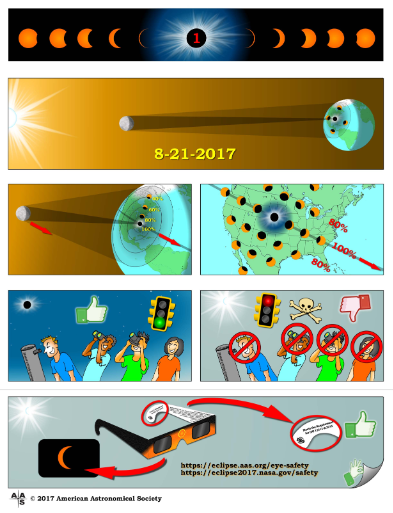 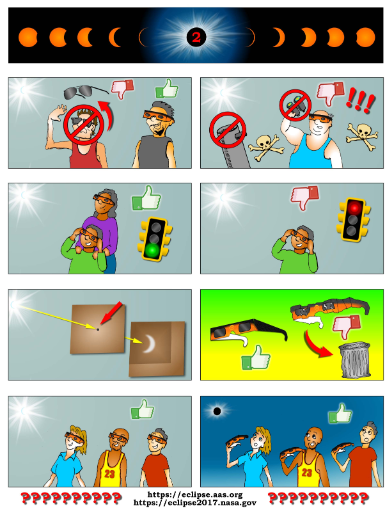 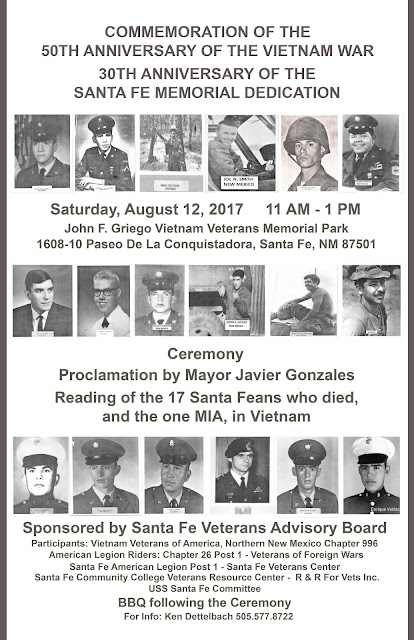 
“Our debt to the heroic men and valiant women in the service of our country can never be repaid. They have earned our undying gratitude. America will never forget their sacrifices.”
—President Harry S. Truman

Santa Fe, NM – At a ceremony this Saturday, the City of Santa Fe’s Veterans Advisory Board (VAB), Mayor Javier M. Gonzales, city leaders and community partners will be recognizing the fallen and missing Santa Fe Vietnam War heroes at John F. Griego Vietnam Veterans Park. The event marks the 30th Anniversary of the original memorial dedication and is part of ongoing events to mark the 50th Anniversary of the war.

17 Santa Feans died in Vietnam during the war, and one remains missing in action. Mayor Javier M. Gonzales said, “We shouldn’t just remember our veterans on Memorial Day and Veterans Day. Moments like this are powerful because in recognizing the men and women who have served this country in uniform, we walk away renewed in our commitment to the values and ideals of this community and this country.”

Reminder: Jodi Thomas, "A Writer's Life" is tonight at the Main Library 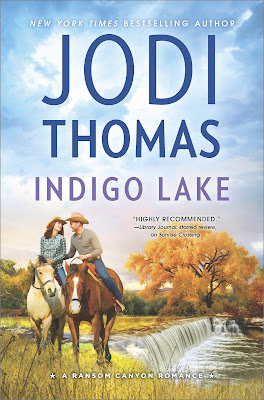 The Santa Fe Public Library is pleased to welcome best-selling western romance author Jodi Thomas to the Main Library (145 Washington Ave.) on Monday, August 7 at 6:00 p.m. Jodi will present a talk titled “A Writer’s Life: a window into the working world of a writer” and will be available for book signing afterwards.

With millions of books in print, Jodi Thomas is both a New York Times and USA Today bestselling author of over 40 novels and 13 short story collections. Her stories travel through the past and present days of Texas and draw readers from around the world.

In July 2006, Jodi was the 11th writer to be inducted into the Romance Writers of America Hall of Fame. With five RITA’s to her credit, along with National Readers’ Choice Awards and Booksellers’ Best Awards, Thomas has proven her skill as a master storyteller.

Honored in 2002 as a Distinguished Alumni by Texas Tech University in Lubbock, Texas, Thomas enjoys interacting with students at  West Texas A&M University in Canyon, Texas, where she currently serves as Writer in Residence.

When not working on a novel or inspiring students to pursue a writing career, Thomas enjoys traveling with her husband, renovating a historic home, and “checking up” on their grown sons and four grandchildren. 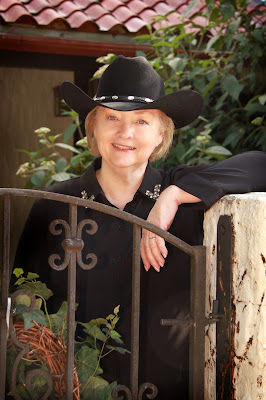 The remodeling and improvements are scheduled to be finished a day earlier than originally expected so the La Farge Branch Library will be reopening on Monday, August 7 at 10:00 a.m. We can't wait to see the changes! Thanks to all for your patience during the closure and it was good to see many new faces at Main and Southside that we normally wouldn't have met. 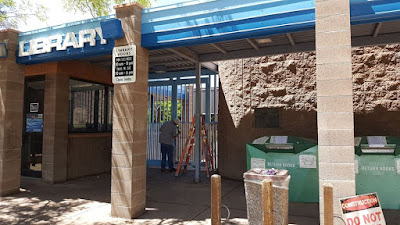 Stop by and peruse our great art shows that will be on display during the month of August: 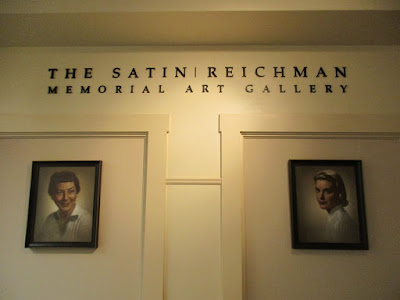 (Photo by AA)
No comments: