I know the calendar says it is Spring and the temperatures being in the high 60s during the day, but it wasn’t really Spring to me until this past weekend.

A lone, volunteer daffodil came up under my red plum trees. I had not planted it there nor have I seen one there in the past two Springs I have been in this house. It is as magical to me as the fields of daffodils of Wordsworth fame

To add to the color in the yard, the small-flowered yellow and white blossom forsythia burst into bloom this past weekend. It is always the first color I have around the house and I carefully clip three branches and bring them into the house. Can flowering fruit trees be far behind?

"Lines and Circles: a Celebration of Santa Fe Families"

Santa Fe’s new poet laureate, Valerie Martínez, has developed “Lines and Circles: a Celebration of Santa Fe Families”. This is a 2 year art project that solicits participation from local families. If your family has 3 generations living in Santa Fe, and is interested in creating or composing a family artwork, such as a short story, film, photograph or pottery, you’re encouraged to apply for this project.

The deadline to apply is May 2008. More information can be found at http://www.csf.edu/csf3/pix/alumni/poet_laureate_vmartinez.pdf

Families who wish to participate can pick up an application at their nearest public library!

posted by aem@ssl
No comments:

Bill Mauldin: A Life Up Front

"The surest way to become a pacifist is to join the infantry." Bill Mauldin, Up Front (1945)

At the end of World War II, Bill Mauldin was famous as the creator of cartoons that depicted the everyday plights of American soldiers, “dogfaces” as he called them. The cartoons made him a hero to his fellow soldiers; they earned him the wrath of General George S. Patton who threatened to throw him in jail. Born into humble circumstances in Mountain Park, New Mexico, Mauldin went on to win two Pulitzer Prizes (the first at age 23), published numerous collections of his cartoons, ran for Congress and worked as an actor.

Mr. DePastino’s presentation will reveal the irreverent originality that made Mauldin not only the most widely known cartoonist of World War II but also the most endeared among his fellow enlisted soldiers.

Bill Mauldin: A Life Up Front
Thursday, April 3, 2008, 7-8:30pm in the Community Room of the Main Library, 145 Washington Ave.
This program is free and open to the public.

Posted by TG at Main
No comments: 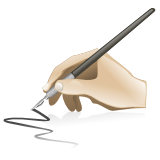 Sheri Bishop, calligrapher and book artist, will present both the upper and lower case letters over the course of three classes. Create a special look for your notes and letters. The classes are free, but registration is required. Participants should plan to attend all three classes. Call 955-2828 to sign-up.

These classes are sponsored by the Buckaroo Ball Foundation, the LANL Foundation, and the Santa Fe Community Foundation. 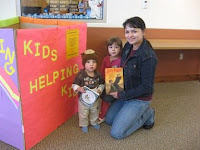 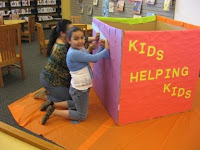 The Santa Fe Police Department has teamed up with Santa Fe Public Libraries to collect children’s books for the Boys and Girls Club. Decorated boxes are located in the city’s three library branches for the collection of new and gently used books. All types of children's books are needed, including story books, educational books and those in both English and Spanish.

Pictured are kids helping kids to get books. The book drive runs from March 15-April 15. In the pictures, a young Southside Branch volunteer gives her time to do some artwork for the worthy cause and we took a picture of our first donators who love coming to the library to check out books and attend our Books and Babies and Preschool story time programs.

Stop in and share your books.
Posted and photos by TT at Southside
No comments:

Aficionados of chain mail, snuff and codpieces rejoice! The Santa Fe Public Library has acquired the Black Adder series on video and DVD. Admirers of all things Middle Aged, Elizabethan and Mad King George - including his son, the Prince of Wales;current and past viewers of Jeeves and Wooster; and House or Mr. Bean, PREPARE YOURSELVES! Before computers, cruise missiles and (gasp!)napkins, our ancestors used the rack, axes and bad food to gain access to information. Thank heavens we are more sophisticated now.

For those who are not fully aware of this little gem, forsooth, get ye to Google or a BBC website! This BBC series includes venerable actors Rowan Atkinson, Hugh Laurie, Stephen Fry, Miranda Richardson and Tony Robinson as Edmund’s execrable(stinky) sidekick, Baldrick.

Thrill to the sounds of hooves and heels clopping on cobblestones and the sweet lilt of the minstrel’s theme song. Create your own cunning plan to reserve your copy of Black Adder ere long.

Posted by CD at Southside
No comments:

What is the Santa Fe Public library worth to you?
How much would you pay out-of-pocket for your library services?
Go to http://www.santafelibrary.org/calculator.html
and use the new Library Value Calculator. You can enter the number of times you have used various Library services in a month and the calculator will tally the value of the Library services you have used. See how your tax dollars are being well spent.
No comments:

We created a new section for new Teen books at the Main Branch of the Santa Fe Public Library. New books for Teens are now being shelved at the end of the Adult New Books Section. Our plan is to make a Teen fiction area in the near future. Come down to Main and check out the new Teen books.
Check out this list of recently added Teen books.
Let us know what you think. 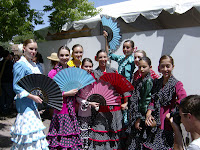 Come to the special activities for you and
your family!

11:00 am to 12 noon –
Joy Ginther and the “Pink Elephant Theater”
Music, Magic, and Puppets
For Kids of All Ages

Southside Branch Library, 6599 Jaguar Drive
(505) 955-2828
This free event is sponsored by the Friends of the Santa Fe Public Library.
No comments:

Tune in @ Your Library

Teens, you still have two days to get technical at your local library. Teen Tech Week runs through the 8th, so you still have time to send in that promotional song you wrote or vote for next year's theme. And remember, libraries aren't just about books anymore.
No comments:

Posted by PS at Southside
No comments:

Familiar Faces in Cat in the Hat hats 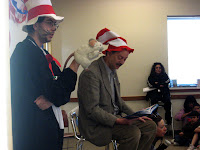 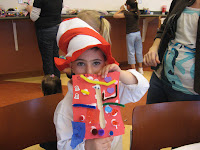 Children and their families came to celebrate Dr. Seuss’ birthday at a party February 29th and March 1st at Santa Fe Public Libraries with Storyteller Daniel Gonzales portraying the character “Cat In the Hat”

Mayor Coss helped by reading “The Cat In the Hat” on Friday at Southside, while Daniel acted out the story. Some of the children were invited to help the “Cat In the Hat” with finger puppets while he read “Happy Birthday” by Dr. Seuss. Drawings were held for Dr. Seuss books and Library Director Pat Hodapp donated her Dr. Seuss hat to be given away at the drawing as well.

After the stories, the children played “Pin the Green Eggs on the Green Ham” and children designed their own Dr. Seuss characters. And of course what is a birthday party without cake? Everyone was in the party mood for cake and goodies to remember Dr. Seuss on his special day.

The Toughest Job You’ll Ever Love

The mission of Peace Corps is “to promote world peace and friendship…and to help the peoples of …countries and areas in meeting their needs for trained manpower.” Today, Peace Corps works in over 70 countries around the world.

The United States Peace Corps was instituted by President John F. Kennedy and was made official by an act of Congress in the fall of 1961, which makes it 47 years old. During that time, more than 187,000 Peace Corps volunteers have served in 139 countries—and it is important to note that Peace Corps never enters a country unless asked to do so by the host country’s government.

So, what is the Peace Corps experience? When I was stationed in Nepal in the 1970s, it was challenging and rewarding. We had three months of initial language training and two years in an immersion situation which led to the fluency which in turn enables learning about, being part of, and adapting to the local culture. Being a Peace Corps Volunteer isn’t easy. In the early days, and still in some countries, Volunteers had to walk to their posts (one Volunteer in Nepal had to walk 10 days to reach his site), often had no running water and electricity, and their situations meant living in an environment whose frame of reference may have only overlapped 10% with what they were used to. Life is not always easy. Privacy is often impossible, and unwittingly being the village entertainment is a struggle that ultimately improves one’s sense of humor. My baths, taken fully clothed at the local spring, drew at least 50-60 onlookers for the first month or so.

Almost all returned Peace Corps volunteers, including me, will tell you that the experience has changed our lives positively and forever----that the ability to adjust and adapt, be patient and flexible, and take a positive course in the face of adversity are still part of our lives. A reference librarian at Southside Library was posted as a librarian with the Ministry of Agriculture Library in Kingston, Jamaica in the mid 80s. He says that although government bureaucracy was sometimes frustrating, he was surprised how during his second year in Jamaica he adjusted and in many ways felt at home. He enjoyed learning about different cultures and food which in Jamaica included Caribbean and Indian.

Over the years, new programs, in response to countries’ needs, have evolved. Small business development, HIV-Aids prevention, forestry, and other sustainable development programs are growing while many of the original programs, such as education, are still in place. Peace Corps is expanding especially in the former USSR and Eastern Europe. Peace Corps has also instituted a push to recruit older Volunteers, hoping eventually to attract those above 50 as at least 15% of the Corps. There are also new programs recruiting minorities and two-year college graduates. A number of graduate schools also take Peace Corps experience as part of graduate studies, and in some cases there is student loan forgiveness.

Volunteers also tout their understanding of international problems and conflicts, but in turn, they almost universally say that they received much more than they ever gave in their country of service. In fact, many of us feel that we are fortunate to have brought back to the US a perspective that we can share with fellow Americans, a perspective that usually includes the importance of other religions and value structures, the highly developed support systems in other cultures, and an ability to either expect the unexpected or have no expectations at all, a state that is remarkably calming. If you’re interested in the Peace Corps click on the link for information. Life is Calling. How Far Will You Go?

Posted by JA at Southside.
No comments: